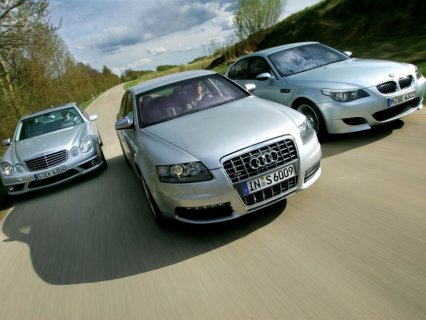 The Best Luxury Car Buys Of The Year

Here’s some good news for eco-minded SUV lovers: Executives at Audi confirmed today that they will begin selling the tiny Q3 SUV in the United States within the next year.

The announcement comes two years since Audi first promised its Q3 for showrooms here, but the turbocharged, 310-horsepower five cylinder RS Q3—the high performance version of the line—will be a welcome newcomer to go up against other compact SUVs like the BMW X1 and Mercedes-Benz GLA.

It will also be a welcome addition to Audi’s national fleet. Not that it needs the help. Last month the automaker sold a record 150, 300 units worldwide, up 10 percent year over year (up 6.2 percent in the U.S.), and is up nearly 8 percent for sales year to date (13.6 percent in the U.S.). Market share nationwide is up more than 10 percent over last year.

“We continue to perform better in every region around the world than the respective overall automobile market, ” Luca de Meo, a member of the board of management for sales at AUDI AG, told reporters.

The Q3, Q5 and A3 Sportback, he said, led the charge in sales thanks partly to Audi’s strong reliability and performance ratings; a strong offering of diesel variants also helped. Four new TDI models – A6, A7, A8, Q5 – are increasing in sales every month, according to company reporting.

Audi’s success is due in part to an overall reputation for making vehicles with a low cost of ownership, says David Wurster, the president of automotive analytics firm Vincentric.

“The basic concept is that it isn’t very important what you pay for your vehicle out the door–it’s more important what it costs over the lifetime that you own it, ” Wurster says. “The sophisticated buyer looks at cost of ownership very closely.”

In fact, the Audi Q5 SUV ranked No. 1 on this year’s list of the most affordable luxury cars on the market today, and the brand lodged three models out of the top 10 that made the cut. They and a few other imports (think along the lines of Acura and Mercedes) join American newcomers like the Cadillac SRX and Chevrolet Corvette as the luxury cars with the best overall value on sale this year.

Behind the Numbers
In order to make this list we used data provided by Vincentric, which is based in Bloomfield Hills, Mich. Analysts there tallied the cost of ownership for each 2013 or 2014 model-year vehicle by evaluating the manufacturer suggested retail price and five-year totals for fuel costs, maintenance, repairs, average national insurance rates, depreciation, interest, opportunity costs and taxes.

We assumed an annual rate of 15, 000 miles driven per vehicle and a price of $3.566 for regular fuel, $3.901 for premium and $3.907 for diesel. We applied a national-average inflation rate of 3.5% for these fuel prices, since the calculations predict costs over five years. We evaluated only cars, SUVs and sedans (not pickup trucks) from recognized premium and luxury brands with base MSRPs of more than $50, 000.

Is the Audi A4 the best small luxury car on the market? | Yahoo Answers

I would definitely say that it's the best car in it's class. It is the most reliable, has the best handling, most space and looks best.
The 2009 model has won all the tests I've read about it.