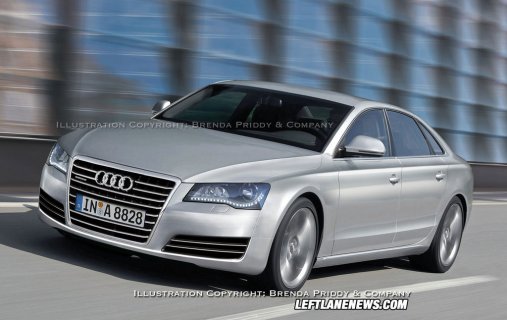 2015 Audi A8 Reviews, Pictures and Prices

The 2015 Audi A8 has generous power, lots of interior opulence and a surprising amount of agility, according to automotive journalists.

The Audi A8 3.0T comes with a supercharged V6 engine that reviewers agree has ample power. They note that the 4.0T’s twin-turbocharged V8 is significantly more potent, and it gets about the same fuel economy. Long-wheelbase A8 L models are available with both the V6 and V8 engines, as well as a 12-cylinder engine and a turbodiesel V6. Every A8 comes with an eight-speed automatic transmission and all-wheel drive. According to the EPA, the 2015 A8 3.0T gets 19/29 mpg city/highway, which is good for the class. Test drivers agree that the A8 has excellent handling for a large car, tackling corners with the agility of a much smaller sport sedan. They also appreciate its sharp steering, excellent traction and smooth ride.

Auto writers note that the 2015 Audi A8’s cabin is especially luxurious, with opulent materials and a beautiful design. Comfortable front seats and spacious rear seats further enhance the car’s appeal, according to reviewers. The A8 has a small trunk for the class. Standard features include leather upholstery, power-adjustable front seats, heated front seats, a 14-speaker Bose surround-sound audio system, satellite radio, a USB port, Bluetooth, front and rear parking sensors, a rearview camera and Audi’s MMI infotainment and navigation system. Available features include front and rear seats that are heated, ventilated and massaging, a cooled rear-seat bin, a panoramic sunroof, a rear-seat entertainment system, a 19-speaker Bang & Olufsen sound system, blind spot monitoring, active lane keep assist, adaptive cruise control, forward collision warning, a head-up display, night vision and a surround-view camera system. Reviewers are impressed with the number of high-tech features in the A8, and they note that the MMI infotainment system has sharp graphics and is easy to use.

Other Cars to Consider

Auto writers say the Mercedes-Benz S-Class has a powerful twin-turbo V8, buttery smooth ride and unbelievably plush interior. They think the rear seats in the S-Class are very nice, with an available massaging function and pop-out tray tables. The S-Class also has a larger trunk than the A8.