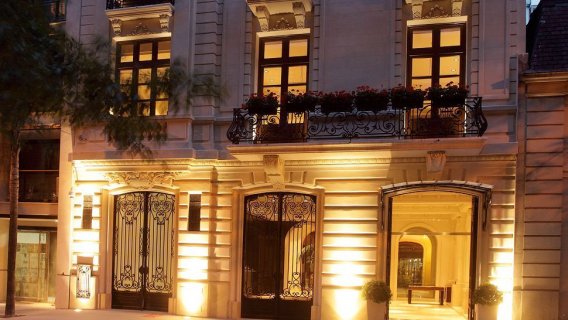 Faena Hotel Buenos Aires, brainchild of Argentinean fashion designer Alan Faena, is unafraid to make some big waves, as much for the ambition of its universe-spanning concept as for its design, courtesy of a rather familiar name: Philippe Starck.

Largely absent, though, is the signature look that defined Starck’s work for Ian Schrager in the Nineties, the white and airy minimalism of the guest rooms and the light-hearted whimsy of the public spaces. Faena is an entirely more serious-looking place, on the gentrifying Puerto Madero Este waterfront, converted from a grain warehouse made from imported Manchester bricks, with interiors in black marble and red velvet—a heavy and dignified imperial style, at once more grand and more passionate than most of Starck’s earlier, lighter hotel spaces.

Of course it’s more than just a design exhibition, and there’s plenty to swoon over even for those who wouldn’t know Philippe Starck from Ryan Phillippe; you don’t have to subscribe to design magazines to be impressed by enormous claw-footed tubs, in glass-walled bathrooms with red velvet curtains. Space is plentiful, and rooms are stocked with technological gadgetry, from flat-screen TVs and automated curtains to wireless room phones that work throughout the Faena universe.

And what a universe it is. The facilities just about live up to the billing, comprising not just the must-haves (two restaurants, spa and swimming pool, complete with poolside bar) but some delightful extras as well, including an art gallery and a gourmet market. The ‘School of Good Living’ offers classes on dance, cooking and wine, and the red velvet Cabaret is an old-fashioned music hall straight out of a David Lynch picture.The Bistro is more typically Starck, in Kubrickian white with red accents and unicorn heads mounted on the walls, serving an international cuisine with plenty of that storied Argentine beef. And if you wish to venture outside the Universe to one of Puerto Madero’s many hot restaurants and nightspots, just call your Experience Manager (we used to call them concierges) for a comprehensive list of recommendations.

How to get there:

This hotel includes the following special privileges for Plus Members only:

What is the closest airport hotel to Buenos Aires airport?